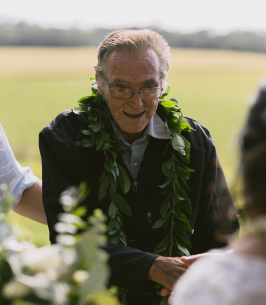 Malcolm M. Franco, 84, of Pukalani and Paia, passed away peacefully on February, 14, 2022, while holding the hands of his daughter, Pam and son, Brian.

Malcolm was born on September 10, 1937 in Paia, Maui, Territory of Hawaii to parents (Predeceased) Alfred Sr. and Lily (Klask) Franco. He was the youngest of four brothers (all Predeceased), Alfred Jr. (Tiny), Joseph, and Robert (Packy). Raised in Paia, Malcolm attended Holy Rosary School in Paia, and Maui High School in Hamakuapoko. In 1955, Malcolm joined the US Army and was in active combat during the Korean War, in the Artillery Unit. After serving three years defending our country, he returned home to Maui in January 1958 and was active in the Boxing circuit. He was also a Inter-Military boxing champion at 125 pounds. He eventually met his future bride, Josephine Sentinella, of Paukukalo (Predeceased) after a boxing event. They married on November 29, 1958, at Christ the King Church in Kahului. After venturing out to the mainland while raising four of their children, they settled in Pukalani, in 1966. In 1973, their youngest daughter was born, completing their family of 7.
Malcolm gained many skills over the years which included carpentry, mechanics, plumbing, coaching boxing and grade school basketball, gardening, cooking, and he loved to dance. He loved to read anything and everything and gave the best financial advice, “save your money”. Malcolm had numerous jobs and a couple of business proprietorships. He worked at General Motors as well as on the assembly line at Fisher Body, both in California, as a truck driver for Ige Construction and Haleakala Trucking and Storage in Kahului, founded Franco’s Liquor Store in Makawao, with his dad and nephews, and also Franco’s Service, a gas station/mechanic shop in Paia. He worked for the DOE as a custodian, DOT Harbor’s Division in Maintenance, and finally retired from DOT Airport’s Division as a Maintenance Supervisor, at the end of 1993. He most definitely was a Jack of All Trades.
Malcolm started the Makawao Boxing Club and trained many young men. His demeanor as a coach was one that the members respected. He took some members, as well as his sons, to compete in the 1982 US Junior Olympics in Colorado Springs. Later, handing down the reins of coaching to his son, Brian.
In 1997, after the loss of his wife, Josephine, Malcolm spent most of his afternoons at Baldwin Beach Park. Enjoying the setting sun, being part of the “Ice Water Gang”, and just relaxing and talking story to whomever stopped by. We would jokingly say, “Baldwin Park til Dark”! He was very independent and wanted to do things in his own way. Malcolm loved to travel to Las Vegas and spent several trips with his children and grandchildren. He was satisfied winning a little than losing a lot. He’ll be remembered as independent, strong-willed, a busy body, an exceptional provider for his family that he loved, and a warrior who defeated so many odds with his health. His physical strength, even in his last week, amazed us all. He was truly blessed.
We lost our patriarch, our dad, and grandpa. Rest in love as we find comfort that you and mom are together again.

The family would like to acknowledge Dr. Maria Termulo for her many years of caring for dad, foster caregivers for the past 11 months, Samuel and Marjory Bumatay, the caring staff of Hospice Maui, especially Brian Rose RN, for guidance and encouragement during dad’s journey Home.